The Caribbean Industrial Research Institute’s (CARIRI’s) Air Quality Management Services (AQMS) unit in collaboration with the Ministry of Health recently hosted an information session entitled, “Let CARIRI help you clear the air” at CARIRI’s Centre for Enterprise Development, Innovation Avenue, Freeport as part of their mandate to promote a safe and healthy working environment.  The launch was well attended by over 100 Health and Safety Professionals throughout the country as well as the Honourable Minister of Health, Mr. Terrence Deyalsingh who gave the feature address

In his speech, Mr. Deyalsingh educated the audience on the hazards of poor indoor air quality stating, “Our indoor environment can be 2-5 times more toxic than our outdoor environment based on everyday office items such as computers and copiers.” He also discussed a familiar term “Sick building syndrome” which the audience agreed is a big deterrent to productivity.

The Minister also highlighted the relationship between chronic Non-Communicable Diseases (NCD’s) and poor IAQ which poses health risks such as Stroke, Ischaemic heart disease, chronic obstructive pulmonary disease (COPD) and lung cancer.  He emphasized the importance of information in the fight against poor air pollution and its health effect and the need for a multi sector approach. The Minister closed off his speech by stating “CARIRI is one of the best kept secrets in the nation with a prominent role in strengthening awareness and support in the fight against poor indoor air quality.”

CARIRI’s Chief Executive Officer, Mr. Liaquat Ali Shah in his opening remarks welcomed everyone to CARIRI’s Centre for Enterprise Development which he described as a national innovation hub and technology transfer centre which is the only one of its kind in the Caribbean.  He went on to say, “We all need air to breathe therefore we are all affected by poor indoor air quality.” Mr. Shah stated that though indoor air quality in buildings was highly publicized in the media, individuals do not fully understand the effects air pollution can have on your health, work life and mental performance which in turn affects productivity.

He went on to describe CARIRI’s AQMS department as experts with extensive experience as evidenced by the completion of one thousand (1000) jobs with over 50 done regionally over a ten year period. He ended his speech with this profound statement on ascertaining the root cause of IAQ, “Better is not always about doing more, but identifying the risk.”

Participants also gained insights from CARIRI’s expert team who are Council-Certified Environmental Consultants accredited by the American Council of Accredited Certification (ACAC) and the Council of Engineering and Scientific Specialty Boards (CESB) which is the most prestigious certification specific to Indoor Air Quality.

Mrs. Tisha John, Environmental Specialist and Head of CARIRI’s Indoor Air Quality Department presented on some of the effects and causes of poor IAQ which she attributed to common indoor contaminants such as dust, fibreglass, indoor allergens such as dust mites from carpet and fabric furniture and even ozone from photocopiers. She went on to explain volatile organic compounds (VOC’s) which are a large group of carbon-based chemicals that easily evaporate at room temperature. These are particularly dangerous as they are found in workplace cleansers, pesticides, disinfectants, glues and even paints.

Mrs. John advised the HR persons and also the HSE officers to keep an eye out for prevalent cases of skin rashes, dryness and irritation of eyes, nose, throat and skin, headaches, fatigue, dizziness and nausea and sinus congestion as these are common symptoms of poor IAQ. She closed off her presentation summarizing some of the common causes of issues associated with poor IAQ which include improperly maintained HVAC’s, contamination by construction materials, continuous re-circulation of air inside buildings and lastly increases in the number of building occupants

The next presenter, Mr. Tricia Singh, Laboratory Manager of CARIRI gave a riveting presentation on, “How mold can affect you.” She started the presentation with this interesting fact, “The human body can go approximately three weeks without food, one week without water but only 3 minutes without air!” She describes mold as the most misunderstood and controversial topic of all indoor air quality parameters which includes mold spores, bacteria, yeast and viruses.

Ms. Singh closed off by saying air contamination is not the only cause for feelings of discomfort and illness and may be related to issues in the total indoor environment such as noise levels, thermal comfort (temperature, humidity and air movement), lighting and ergonomics which she explained CARIRI has the capability to test.

CARIRI’s capabilities were expounded by Mr. Rishi Shaffie, Environmental Technologist of CARIRI who describes the Air Quality Management Unit as a multi-disciplinary team with extensive experience and a wide range of skills to meet the needs of the Client. Some of the services offered by CARIRI in the area of Indoor Air Quality include but are not limited to:

Basically, the department can monitor for any occupational hygiene exposure (noise, heat stress, gases, particulates, vibration, lighting, and ergonomics) and compare results to international and local standards and guidelines.

Mr. Abdulah made a suggestion that though the session undertaken by CARIRI was informative and a step in the right direction, more needs to be done through targeted information via various media specifically the air conditions firms and even insurance companies who he believed would benefit most.

Professor Seemungal answered several questions posed by audience members on occupational Asthma and Chronic Obstructive Pulmonary Disease (COPD) which are lung diseases that make it difficult to breathe. From his experience in Trinidad over the last 13 years he believes there is a rise in lung related disease and a few instances which could be linked to exposure from the workplace.

Mrs. Ferguson gave invaluable insights into how employees can make a difference by increasing communication between departments and documenting workplace illnesses in real-time. This collection of data can then be analyzed by management to assess troubled areas within organizations and can also be used for trend analysis.

CARIRI and CED continue to remind the public about its diversity and innovation not only in scientific research but also entrepreneurial development for example the Business Hatchery program and the IAS (Idea Advisory Service) just to name a few. CARIRI is not only about general research rather it is about applied research.

For more information on our Indoor Air Quality Department, you can contact them at: 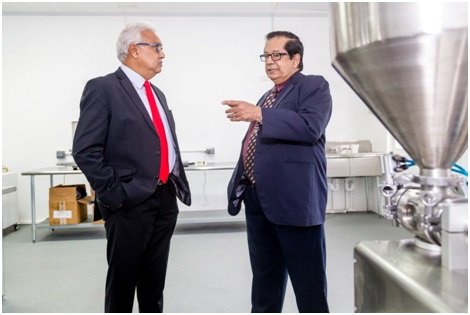 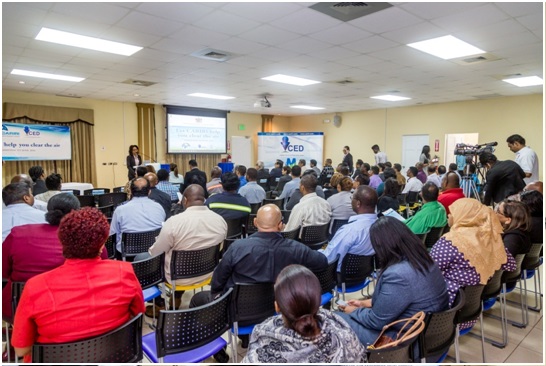 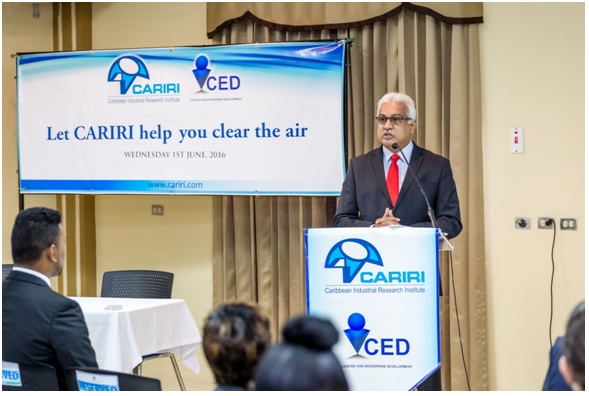 The Honourable Terrence Deyalsingh, Minister of Health during his Feature Address 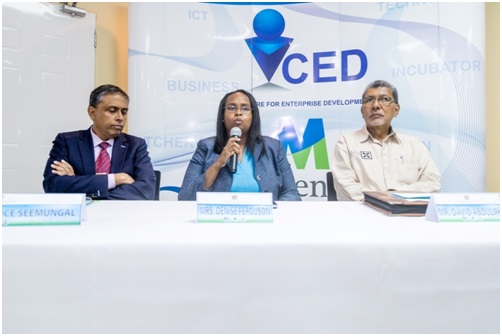