The Workshop was hosted with funding support from the Canadian Government, under a special fund for Renewable Energy and Energy Efficiency, which is administered by the Barbados based Caribbean Development Bank (CDB). The Workshop Facilitator was Mr Evan Jones of the Canadian Standards Association (CSA) and training was afforded to six (6) staff members of CARIRI and a staff member of the CDB.

The Training forms part of CARIRI’s ongoing efforts to increase its range of service offerings to more effectively meet client needs for new and improved technology-based services, while simultaneously building capacity in key areas of strategic importance to national economic development, in support of the Government’s diversification efforts.

The hosting of the Workshop was informed by the Government of Trinidad and Tobago’s approval of a Carbon Reduction Strategy which targets energy efficiency and GHGs emission reduction in the transport, power generation and industrial sectors in order to meet the emission reduction goals established by both the Kyoto Protocol and the Paris Agreement, to which the Government is a signatory, within the overarching United Nations Framework Convention on Climate Change (UNFCCC).

The Carbon Reduction Strategy, which is being administered by the Multilateral Environmental Agreement Unit (MEAU) of the Ministry of Planning and Development, is intended to address the implementation of a robust Monitoring, Reporting and Verification (MRV) system which will track the success of measures taken. The monitoring, reporting and verification of greenhouse gas emissions are a requirement for signatories to the Paris Agreement.

The Training Workshop will provide CARIRI with the necessary knowledge and skills to effectively plan and conduct GHG monitoring and measurement activities, inclusive of providing an independent third-party verification of reported emissions to give credence to the collected data.  In addition, the Workshop will facilitate knowledge transfer of strategies for reducing companies’ greenhouse gas emissions. 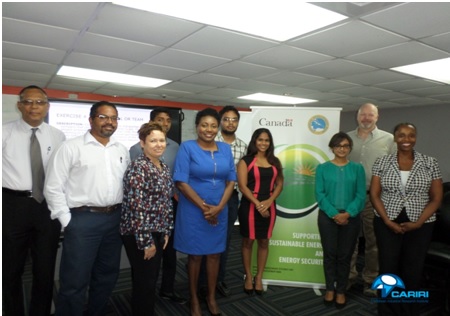 Bridging the Gap to Commercial Application of Innovation
August 20, 2018
Go to Top