CARIRI’s Chief Executive Officer Mr. Liaquat Ali Shah welcomed key stakeholders of the Food and Beverage industry and extended special thanks to the Trinidad and Tobago Manufacturers Association (TTMA), Chaguanas Chamber of Industry and Commerce and Couva Pt. Lisas Chamber of Commerce for partnering with CARIRI on this launch.

In his remarks, Mr. Shah stated that relevant to diversification would be manufacturing, export, value added activities and even local raw materials. He believes that innovation, which he defined as “creativity being implemented” lies at the very core of all efforts.

Within his speech he explained, “Exporters are aware that requirements such as HACCP are pivotal to accessing international markets, locally, cognizance has to be taken of the tourism thrust and last but not least, the health and wellness of our population and the consequences, far reaching consequences of food safety. In this context if I may be somewhat provocative we need to consider the whole area of exported foods. Is there a reciprocity for food imports i.e. HACCP compliance by the relevant foreign manufacturers from whom we import?”

To exploit the point he gave this example, “local tourists suffer food safety illness, who would be blamed even if it was as a consequence of a foreign imported food? It is the manufacturers of this country who would get the shaft. We need to address the quality of what we are importing into the country.” He closed by emphasizing CARIRI’s willingness to address other complimentary areas within its mandate and to work with all public and private agencies in a national effort which he firmly believes, that with adequate and meaningful coordination and commitment there can be much achievements.

In his address, Minister Rambharat explained that whilst food production is important, he has an overwhelming concern about the patterns of food consumption, health, wellness and food safety in particular. The Minister spoke of the unfair trade that exists in relation to food in this country where our local producers, in whom he has a lot of confidence, has unfair competition from imported foods. He also drew attention to food products that are often not properly labeled, imported under the guise of being something that it is not, issues with packaging and what is said and not said on the labels and a wide range of issues that make the competition faced by local manufacturers and producers unfair.

The Minister also went into detail of two experiences he encountered with HACCP with a rudimentary smoke fish operation on the coast and the coconut vending around the savannah. Both cases he believed exemplified the need for food safety to become an obligation in the country, especially the standards of preparation and packaging.

According to the Minister perhaps the most controversial of course, is the well populated and popular food vending on the savannah itself which he believes attracts a lot of traffic jams every night. He went on to say, “We have partially resolved the issue of food safety and vending around the savannah by working with the vendors. But across this country, it’s a problem.”

He continued by saying, “The government has a farm to table policy in agriculture which aims to eliminate the middle men and the several hands through which food and fish pass through, escalating price and comprising quality and interfering with reliability along the way.  The average fruit or vegetable in this country changes hands about five times before it reaches you, the end user.”

The programme also featured presentations from Mrs. Margaret Taylor, Programme Leader, CARIRI’s Biotechnology department on their role and functions in aiding companies with Good Management Practices (GMP) and closed off with a HACCP presentation from Mrs. Sharon Peart-Rose, Food Technologist, CARIRI.  Sharon described HACCP as a food safety management system which focuses on prevention strategies required to eliminate or reduce the impact of known hazards that occur at specific points in the food production process. She emphasized that HACCP must be supported by pre-requisite programs which are imperative to a successful system. She highlighted the seven principles of HACCP and the preliminary steps which should be taken such as having the right team and having flow diagrams.

Sharon ended by talking about the human requirements for HACCP, the challenges of HACCP implementation which were offset by the exponential benefits HACCP being a cost-effective system which can integrate into prior quality systems with the aim of reducing loss and waste throughout the food production process. 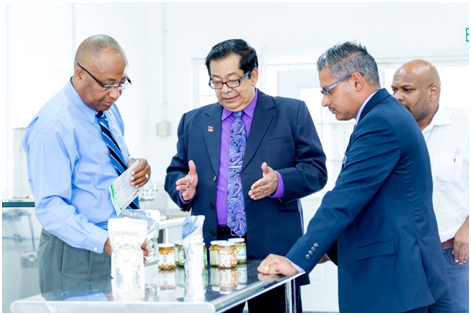