After having a similar session back in April, there was a lot of interest from the Corporations for a specific session on Infrastructure Projects, and CARIRI accepted the challenge to host this seminar.

Achieving quality standards is one of the most important issues to consider when thinking about infrastructure projects and the management of quality is an important factor in determining the competitive edge of any business.  It is vital that the Regional Corporations recognize that a system needs to be in place to ensure that quality is present from the start.  This will certainly go a long way in the quest to get better value for monies spent.

In his opening remarks, Mr Liaquat Ali Shah, Chief Executive Officer of CARIRI spoke about the evolution of CARIRI from just a testing lab with one location to an innovation hub that now has three locations including the Centre for Enterprise Development which was created to accommodate the full gamut of activities along the enterprise creation spectrum from idea to market. It provides both accommodation and technical and business advisory support services to individuals and enterprises with innovative ideas/projects wishing to take these through the incubation (development) process to commercialization

Mr Shah spoke about the role of CARIRI in diversifying and creating opportunities for innovation and called on the various stakeholders to partner with CARIRI moving forward.  He went on to state that the Corporations were one such stakeholder and this is why CARIRI saw it fit to hold this session at this time.  He wanted to make the distinction between quality in construction and quality construction and saw this session as providing a foundation and a base for Corporations to enhance their performance.  As an accredited and certified institution, CARIRI is willing to work with the Corporations, Borough Councils and Local Government to ensure that quality is present in every area of infrastructure development.

He wanted to remind the audience that CARIRI has never been accused of ‘cooking’ the results, and that CARIRI has established a record for confidentiality and quality in what they do.

The Minister of Rural Development and Local Government, the Honourable Franklin Khan delivered the feature address to the audience and started off by stating that the Government “recognised the increasingly significant role of Regional Corporations in the planning, overseeing and execution of construction work across the country.”  He noted that this has led to a policy shift which has led to decentralisation, empowerment and giving more responsibility to the Regional Corporations and Local Government.

He spoke about the creation of the Ministry of Rural Development and cited areas such as Matlot, Cedros, Icacos, and Brasso Seco as having dilapidated infrastructure since infrastructure projects needed to be justified.  He stated that there is a “deliberate decision that rural development can only take place with direct government intervention.”  The Government intends for rural communities to have the same level of amenities as its urban counterparts.

The Minister went on to state that “quality assurance must be applied at every step of the process from the tendering process to selection of contractors to the planning and execution of works to the detailed assessment before certification and completion.” He reminded the audience that the “role of government, whether central or local is charged with the responsibility of managing the resources of the country.  We as public officers are the stewards of the resources for the people of the country.”

He closed off by issuing a warning that sloppy work does not go unnoticed anymore. He pointed to social media where news travels quickly and the reputation of an Institution can be built or damaged accordingly.

Ms Lisa Ramoutar, Team Lead at the Industrial Materials Unit – Civil and Mr Gerald Herreira, Senior Civil Technician continued by giving presentations on Quality Assurance, Specifications and Properties of Construction Materials, Common Defects in Construction of Infrastructure Projects among others.  Both presenters were able to give many examples as they have a wealth of knowledge in the sector.

The session was well received by the Regional Corporations and Borough Councils who expressed interest in having more seminars like this in the future.

As a certified and accredited testing facility, CARIRI has been taking the lead in bringing these key quality issues to the forefront.  With over 40 years of experience, the Civil Engineering Unit is the most advanced ISO-certified civil/construction engineering testing laboratory in the Caribbean. CARIRI’s team of experienced professionals has provided testing and consultancy services to government ministries locally and within the region and to the construction. 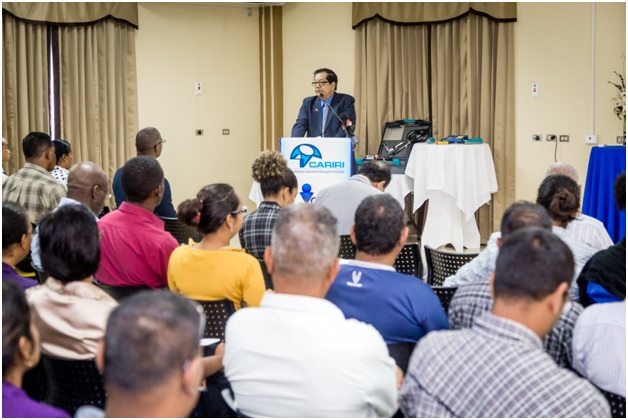 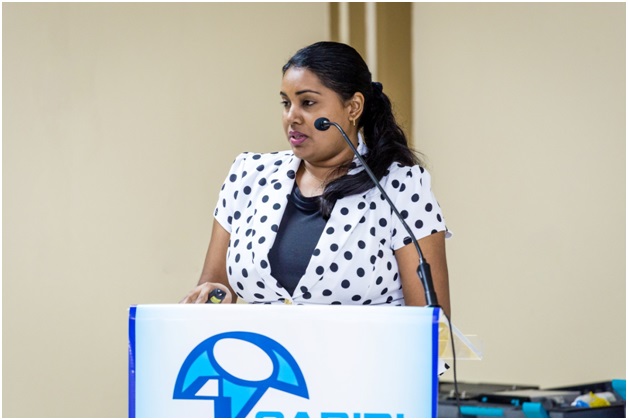 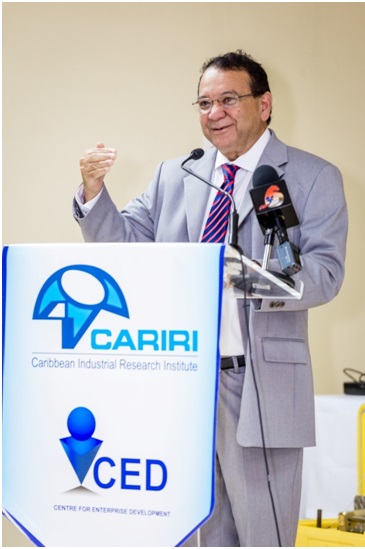 Minister of Rural Development and Local Government, the Honourable Franklin Khan speaking to representatives of the Regional Corporations and Borough Councils