The Caribbean Industrial Research Institute (CARIRI), in collaboration with Kidavo Creations, celebrated World Book Day 2018 on Monday 23rd April 2018 with the launch of “My Tropical ABCs” at its Centre for Enterprise Development (CED), Innovation Avenue, Freeport. One facet of the Centre is the Idea Advisory Service (IAS) which is an initiative geared towards assisting persons with taking their idea to market.

CARIRI’s IAS forms part of the Institute’s thrust to build capacity for Innovation on a national scale, and thereby contribute more substantively to the achievement of Government’s stated developmental goal of economic diversification. Misty Hamid, owner of Kidavo Creations and author of My Tropical ABCs, is one of CARIRI’s prominent Idea Advisory Service clients.

My Tropical ABCs is a fun and innovative book designed to educate children on indigenous foods by matching the fruit names with letters of the alphabet. It is specially designed to reach young children at the early stages of language and reading development, and gives parents/guardians the opportunity to sit and spend quality time with their children who are attracted to easy-to-read books, with vivid colours and illustrations.

A survey of the current market revealed that there are no books designed to teach children about tropical fruits. Trinidad and Tobago’s children are, for the most part, unfamiliar with the large variety of local flora and fauna available to them. My Tropical ABCs aims to instill a greater love and appreciation for our local culture through an educational medium that is appealing both to young people and adults.

The alphabet is the foundation of language and is essential for a child’s growth and development. Researchers and educators agree that beginning readers experience more success in reading when they can associate letters to words within their familial environment. Educating the youth on our indigenous fruits is also an integral step towards promoting an “Eat Local, Support Local lifestyle.”

The launch was well attended by persons from diverse backgrounds such as local bookstores, various Government Ministries and both primary and secondary schools. The launch kicked off with a pan rendition of the national anthem by Mr. Brian Benoit of Benoit Academy of Steel Pan.

CARIRI’s Chief Executive Officer, Mr. Liaquat Ali Shah, in his opening remarks, welcomed everyone to CARIRI’s CED which he described as a National Innovation Hub and a Regional Technology Transfer Centre which is the only one of its kind in the Caribbean. He went on to quote Michael Jordan’s famous line “I believe I can fly” and encouraged attendees to believe in their dreams. He stated dreams act as the catalyst for innovation and change in this world and persons must hold strong and fast against detractors.

In closing, Mr. Shah challenged the Ministry of Agriculture, Land and Fisheries to invest in providing plants and seedlings of the various local fruits featured in My Tropical ABCs. This exercise, he explained, would result in indigenous fruits with local names being made available to the local population and tourists; which is integral to promoting an “Eat Local, Support Local lifestyle. He commended Misty for her courage and the Ministry of Education for their support.

Honourable Senator, Avinash Singh, Parliamentary Secretary, Ministry of Agriculture Land and Fisheries (MALF) started off his remarks by commending Misty Hamid, the author of My Tropical ABCs, on creating a book that in his childhood would have been extremely helpful in his quest for learning about our local fruits and fueling his passion for Agriculture. He responded to Mr. Shah’s challenge by agreeing that it is the responsibility of the MALF to bolster the efforts of the research division and increase the supply of information to the population.

Mr. Singh believes that, as in the case of the Steel Pan, My Tropical ABCs, which showcases our indigenous fruits, could become a hallmark of our country and that as a nation we should be proud to say we created this publication. He closed off by asking the representatives of the Ministry to work towards supplying every school in Trinidad and Tobago with a copy of My Tropical ABCs.

Ms. Karen Ramdahin- Nandaram, Curriculum Officer- Agricultural Science from the Ministry of Education in her feature address stated, “The launch of this book is a sign of maturity when we as a people can provide resource material that is nested in our Caribbean identity. I commend CARIRI for providing an avenue where persons can see their ideas or prototypes become income generating realities. The Idea Advisory Service is in sync with the Ministry’s thrust towards innovation, creativity and idea generation, and is integral to stepping away from oil and gas to become an intellectual and knowledge based society. In closing, a wise man once told me while pointing to the library that all the knowledge is in there. I encourage everyone present here today to go read a book!”

Ms. Hamid spoke of her sons as her inspiration when teaching them their ABCs. She conveyed her dissatisfaction with teaching them “A for Apple” instead of one of our tropical fruits grown on our beautiful island. Misty spoke of hearing her inner voice saying, “Why don’t you write a local ABC book?” She dismissed the idea at the time and said to herself, “What do I know about writing books?” The idea however was not done with Misty and over time she would start doodling or jotting ideas until one day she was introduced to the illustrator of her book, Jason Alfred, who began drafting sketches on which she would ask her children for feedback.

Eventually, she reached an impasse where she had this amazing idea but no clue of how to conceptualize and turn it into a reality. She came across a Facebook advertisement on CARIRI’s Idea Advisory Service and decided to give them a call. She told the audience “Never be afraid or ashamed to ask for help. Don’t feel as an entrepreneur that you have to make this journey alone! CARIRI’s IAS Team has provided me with the tools to cultivate my idea and has shown me that entrepreneurship is a way of life. CARIRI’s IAS Team is highly skilled and professional with a true passion for cultivating innovation and supporting ideas. Their network of connections has opened doors for me to connect with stakeholders such as the Intellectual Property Office (IPO), Ministry of Education and fellow entrepreneurs who have shared their journey and provided much needed support and guidance.”

Misty’s advice for entrepreneurs is, “Write down your idea so it moves from a thought to paper, connect with the right people and most importantly, pray. Don’t allow yourself to get stuck in your comfort zone, push yourself beyond your limits and allow yourself to grow.”

Ms. Melissa Bissoondath, Business Development Officer at CARIRI, spoke about Misty’s journey with CARIRI and how the Idea Advisory Service assisted her through the following steps in making her dream a reality:

Melissa closed by saying, “Everyone has the ability to create innovative ideas regardless of their skill set or job level.”

CARIRI would like to remind the public about its diverse service offerings, not only in the area of analytical services, but also in the areas of Research, Development and Innovation, with particular focus on its programme geared towards entrepreneurship development and business creation through its CED. The Idea Advisory Service represents one such programme.
If you have an idea and would like assistance from CARIRI’s Idea Advisory Service, contact them at: 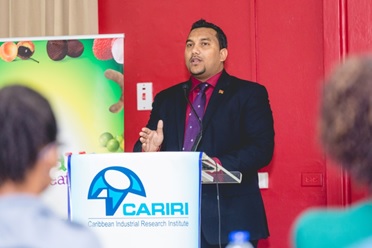 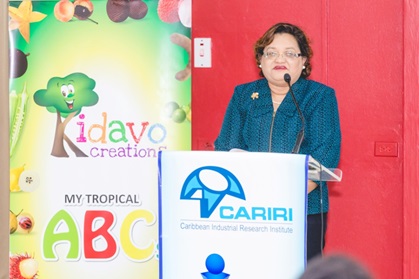 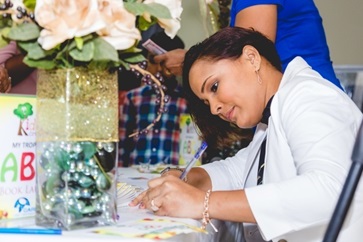