Street foods comprise of a portion of the average Trini’s diet – shark and bake, doubles and roti to name a few examples… Street foods are not a local phenomenon though – in the U.S. common street foods include hot dogs, pretzels and tacos and in the U.K., kebabs, hamburgers and doughnuts are commonly sold in the streets.

There are several factors that have contributed to the rise in the number of street food vendors in many cities. Population growth has spurred the worldwide escalation of street food vendors. In addition there is a need for quick, ready-to-eat foods with less women having time to prepare meals at home. The increased workforce has also expanded the market for street foods. Street foods are also usually lower in cost compared to restaurant and fast-food meals, making them desirable to consumers. Lastly, street foods usually are cultural/ ethnic foods making them an attractive alternative to home-cooked meals.

Street foods describe a wide array of foods and beverages sold and are sometimes prepared in public places, most notably streets. The wide classification of street vendors also include ‘hawkers’ or ‘sellers.’ However while they are convenient and tasty, there are several food safety-related hazards associated with these foods…

Firstly, in many cases, the vendor who is collecting money is also serving food. Such a situation poses a great risk for cross-contamination, as money is not a sanitary object. In addition, in many street food stalls/ booths there is the unavailability of potable water. Potable water is needed continuously for the sanitary running of any food operation – for cleaning and sanitation activities and for cooking/ preparation activities… to name a few. A lack of a supply of potable water would imply that these activities are insufficiently carried out or not at all!

In several instances there are untrained persons engaging in the sale of street foods. Training in personal hygiene and sanitation are key areas that critical to having day-to-day food safe operations. More so, on-going training in food safety is advised for production workers so that key points are kept ‘fresh’ in their memory.

The environment in which street foods are prepared or sold also compromises the safety of these foods. Such foods are in close proximity to several pollutants, which include smoke from vehicles, heavy pedestrian traffic and even rain. In many cases the preparation and point-of-sale area is an open facility, which heightens this risk of airborne contaminants as well as pests. In light of this, it is extremely important for vendors to engage in cleaning and sanitation activities as often as possible.

Due to the wide variety of raw materials utilized in the preparation and sale of street foods, several storage issues are encountered. While this is not a major issue for shelf-stable or non-perishable foods, it is of major concern for items that require refrigeration and freezing (especially when packages are opened), such as dairy items. Many facilities that sell street foods lack adequate or proper storage facilities in relation to the volume and type of raw materials used in daily activities.

So the next time you decide to purchase foods from the street, please be observant before you make a decision… 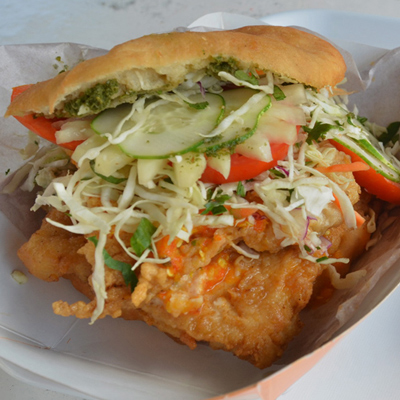